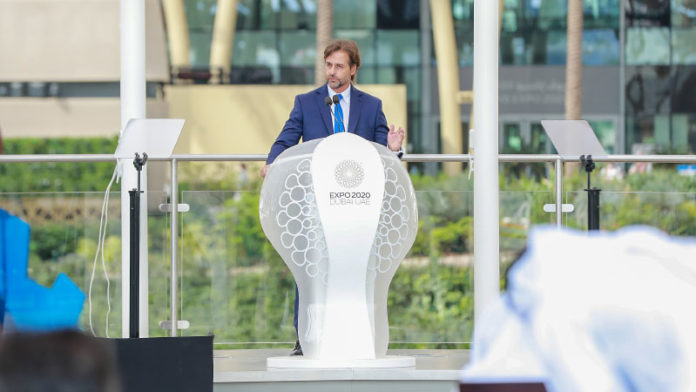 Dubai, UAE — (ARAB NEWSWIRE) —  Dubai Chambers and Chamber of Commerce and Services of Uruguay signed a memorandum of understanding to encourage, promote and facilitate an eﬀective cooperation in the areas of trade, industry and services. The agreement was signed in the presence of President of Uruguay Luis Lacalle Pou, Sultan Bin Sulayem, as well as representatives from both Chambers of Commerce.

The agreement aims to further promote business and investment between the business communities from both Dubai and Uruguay, including the identification of the most relevant sectors of mutual interest.

As part of the MoU, both institutions will organize trade missions and will encourage their respective members to participate in promotional events including seminars, trade fairs, exhibitions and conferences.

This agreement was part of a three day oﬃcial visit of President of Uruguay to Dubai together with a delegation formed by Uruguay key public and private representatives. The signing was followed by a Bilateral Business Forum attended by President Lacalle Pou, Sultan Bin Sulayem, Chairman of Dubai International Chamber; Hamad Buamim, President & CEO of Dubai Chambers; and businessman from Uruguay as well as by government oﬃcials from both countries.

President Luis Lacalle Pou said that Uruguay is looking forward to promising economic and trade relations with the UAE, calling on Emirati companies to come to Uruguay and invest in it, especially as it provides an ideal environment for the growth of investments in various sectors that can achieve common goals and interests.

President of Dubai Chambers, Sultan Bin Sulayem said the agreement builds new bridges of cooperation between business communities in the UAE and takes Dubai’s trade relations with Uruguay to the next level.

The oﬃcial visit also included the celebration of Uruguay National Day at Expo Dubai that took place on 21st February and that was attended by local authorities and representatives from both Emirati and Uruguayan business communities. The event showcased some of the most iconic Uruguay music including a performance of Suite Gardel by the SODRE’s dance troupe. Guests also enjoyed an incredible tasting of premium Uruguayan cheeses, rice, meats and wines.

Prior to the oﬃcial visit, Uruguay XXI and the Ministry of Foreign Aﬀairs, with the support of the Chamber of Industries of Uruguay took part in the Gulfood food fair promoting the country’s exportable oﬀer alongside with producers of rice, tea, cocoa, meat, dar products and honey.

The memorandum of understanding signed between both Chambers of Commerce, as well as the visit of President of Uruguay Luis Lacalle Pou and the delegation of Ministers and captain of industries from Uruguay in Dubai, represent the strong commitment of Uruguay to further develop business and investment links with the UAE.

For more information, go to https://www.uruguayxxi.gub.uy/en/.